Boxten Kudziwe was arrested and charged with murder along with two other men in 2006.  One of his co-accused escaped and was not re-arrested, the other plead guilty and was sentenced to whole of life imprisonment in Zomba Maximum Security Prison in 2010.  Boxten, who has always maintained a not guilty plea, has spent the past six years in Chichiri prison without being tried.

On my list of the 255 homocide remandees in Chichiri prison, starting with those arrested in 2004, Boxten is number 10.  I have been told by prisoners that there is a time when you must decide whether to continue the struggle to survive prison life or  simply give up.  Boxten decided long ago that he would put his faith in God and survive.  He keeps busy by teaching other prisoners English, making his way through the works of Shakespeare and helping the paralegals in identifying the most vulnerable prisoners to interview for bail.  Boxten also hopes to train as a paralegal when he is released, so that he can help others who are suffering as he did.

Many people have worked with Boxten over the years, most of whom have continued to support Boxten’s fight against injustice, whether it be through letters, visits or legal advice.  Last week Boxten had his fifth bail application heard at the High Court in Blantyre.  His application was denied without any other justification than the “seriousness of the offence of murder”.  The Judge did however list his already part-heard trial, which was previously adjourned in 2010, to be heard on 12 September 2012.

I hope the next time I write about Boxten, I will be letting you all the know that he was found not guilty and is enjoying life back home with his wife and two daughters. 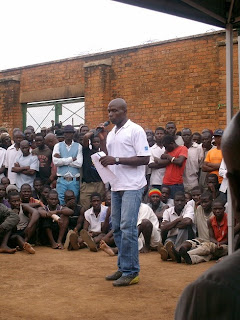