On Saturday, we all made our way to Nanzikambe Arts Cafe to watch a performance by current prisoners from Chichiri and Zomba prison.  Effie Makepeace has worked with prisoners in Chichiri for the past three years, running drama workshops which help prisoners to express their emotions and kep active during the days, months and years they spend incarcerated in inhumane and degrading conditions.  Nanzikambe Arts Development Organization (http://nanzikambearts.org/index.html) was the perfect place to display the hard work of Effie and the prisoners.   Nanzikambe, meaning Chameleon in Chichewa, works to promote “Arts and Culture for positive change”.

The play opened with a powerful and beautiful poem, written and read by Harrison.  I had met Harrison on my last trip to Malawi, where he had been serving his sentence in Chichiri prison for 19 years.  His crime?  Driving a stolen car into Zambia.  On May 16th 2012 Harrison was released.  Understandably, Harrison did not wish to return to Chichiri to rehearse, but was still committed to performing the play he had written with his fellow drama group prisoners to portray his experiences of the legal process.

The play opened with a court room scene depicting a prisoner being sentenced to 7 years hard labour.  He was asked to put forward any mitigating factors; something most remandees do not experience without spending several years in prison first.

The prisoner then began the emotionally and physically draining prison term he would be forced to endure for the next seven years.  The audience, a mixture of ex-pats and malawians, were genuinely shocked at the lack of food, cramped sleeping conditions, and disease prisoners are exposed to.  My friends here are aware of the situation because of the work Emile, Richard, Amanda and myself have been doing, but some malawians were curious about the amount of people in this situation.  I informed them that there are currently 750 remandees in Chichiri prison alone, some who have been there since 2004 without a trial.

The actors also chose to mention the opportunity for reform that the Malawi prison service does offer.  As the prisoners demonstrated their mechanics and carpentry skills my malawian friend translated what the actors were saying “They have arrested you, but have not arrested your mind”.

After being released from prison the actors highlighted the problems ex-convicts face on returning home.   Shunned by his community, he struggled to get work; even with the carpentry and mechanics experience he had gained in prison the stigma attached to ex-convicts often results in them being blamed for other crimes that occur in village. 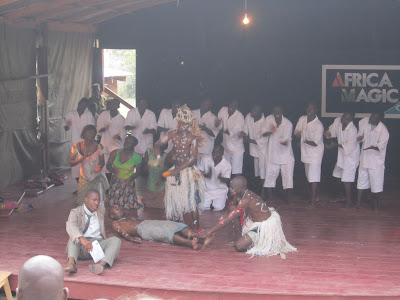 The protagonist in the play was re-arrested by the police after a victim of a theft alleged it was the ex-convict who committed the crime.  The audience was then introduced to the police brutality almost every prisoner will experience on arrest.   He was forced to confess after being beaten with panga knives, burnt with an iron and sent back to prison.  The men performing bear the scars of this brutality and after a huge round of applause and a standing ovation, they were taken back to Chichiri where they will share a cell with over 200 other men.