We started the session by inviting Max, an ex-convict who now works with Nanzikambe Theatre Company to run drama workshops in prisons raising awareness about HIV/Aids, to talk about his experience of going through the legal system.  Max spoke about the common misconceptions among prisoners who are unrepresented; including the genuine belief that the Magistrate’s and Prosecution are working together against the accused and the assumption that they will not be released unless they can provide a large sum of money. 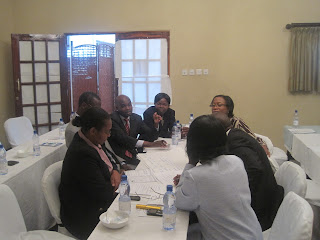 We then asked the Magistrate’s to engage in group discussions, to explore how they could make the court process less intimidating and more accessible for those unrepresented.  I was pleasantly surprised by the majority of suggestions put forward by the Magistrates.  I was particularly impressed by a Magistrate from nearby Limbe, who suggested that explaining the role of the Magistrate at the start of proceedings and emphasising their impartiality, could address the accused’s concerns that the Magistrate is working together with the Prosecution.  Further, after learning that the police are not fulfilling their duty to inform the accused of their right to bail, all groups acknowledged the need for explaining to the accused, in simple terms, their right to bail under section 42 (2) (e) of the Constitution, during their first court appearance.

After the session I spoke to one Magistrate who told me her eyes had been opened to issues surrounding bail which she had never considered.  She said it was an invaluable experience to hear from someone who had gone through the legal process and assured me that she would integrate what she had learnt at the session into every hearing she presides over in the future. 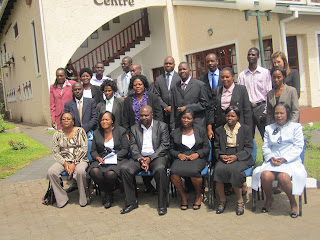 The bail education project was featured in the Malawi Sunday Times –